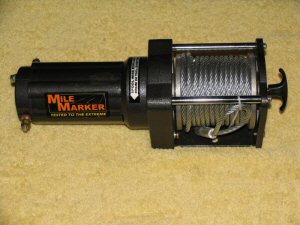 I always say that if you don’t get stuck at least once every ride then you simply aren’t riding hard enough. Sometimes when you get stuck, I mean really stuck, you need more than just a little patience and a lot of throttle to get yourself out. You need external motivation. Some folks pack a come-along or a yank-em strap in their toolbox but when you are truly stuck in the soup an electric winch is the hot ticket.

Winches don’t come cheap, however. A quality winch and mount plate can run in excess of $500. We at 4X4REVIEW are always on the prowl for cost-effective solutions so we started looking for a winch that wouldn’t break the bank. It needed to be a quality product, of course, because cost-effective doesn’t mean cheap so we gave our friends at Mile Marker a call.

Installation wasn’t difficult but the PE3500 wasn’t a simple bolt on either. Mile Marker provided almost everything needed to complete the installation. You will need to acquire your own mount plate, however, since Mile Marker doesn’t sell them – hey MileMarker, start selling winch plates! The hardest part about the installation was locating a spot to mount the solenoid unit. We needed to find somewhere relatively dry that was near an appropriate place to mount the remote control jack. Under-seat space on the Rancher is rather limited so we settled on a spot behind the fuel tank but in front of the seat on the left upper frame rail.

We were a little disappointed that Mile Marker didn’t include bolts to secure the included Hawse fairlead but a quick trip to the hardware store solved that problem. The only other installation problem was that when installed in the Rancher, the right hand headlight access panel is in the way. As of this writing we are working on a way to modify the panel so we don’t have to leave the back of the headlight exposed to elements.

Like most other ATV winches the 2 HP electric motor powers a planetary gear set and as its name implies the PE3500 is rated to pull 3500 lbs. Unlike most winches the PE3500 lacks a handlebar mounted control switch. This makes installation much easier but it means that you need to carry the remote control with you if you intend to use the winch.

The PE3500 performed flawlessly. Trying to keep the Rancher stuck with the PE3500 was like trying to keep Homer Simpson away from a pork chop sandwich. The PE3500 pulled like a locomotive. We were not able to get the winch to hiccup even after repeated abuse. We found the line speed to be a little slower than the Warn installed on our Suzuki King Quad but quite a bit faster than a comparable SuperWinch.

The weather-proof remote control unit is well sealed against the elements but it takes some getting used to. The IN and OUT buttons are on opposite sides of the unit so you have to flip the unit over to reverse the winch. This is a little weird at first but once you get used to it, it works just fine. The remote control provides plenty of cable so you can operate the winch from a safe, dry position a few feet away from the quad.

One feature I particularly liked was the push/pull handle used to disengage the clutch so you can free-spool the winch cable. Some winches employ a dial type mechanism that is difficult to operate when the winch is buried in the nose of an ATV. The PE3500’s mechanism was simple and easy to operate.

So did we like the Mile Marker PE3500? Yes! There were a few compromises such as the lack of a supplied winchplate, handlebar switch or a roller fairlead but these little issues are relatively easy to deal with. The PE3500 was reliable and easy to install. Most importantly, with a retail price of $299 (we found it for as little as $220) you can have a 3500 lb winch for the price that other major manufactures would charge for a 2000 lb. winch.