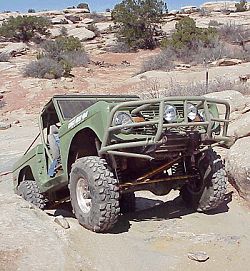 Old Heroes Never Die…boy ain’t that the truth, but we’ll get to that in just a minute. Let’s first ask a few questions. Are you a serious, long-term rock-crawler or off-roader? can you remember way back, when 32 inch tires were pretty darn big for a dedicated trail machine? Have you been an avid off-roader for at least 8 years and subscribe to 3 or more magazines?

If you answered yes to any of these questions, then you have probably seen this rig before. Memory not quite serving you too well? Think waaaaaay back… nope, a little further… Back in December of 1994 a really trick, full-on, custom-built 4×4 was built (hint: It used to be baby blue). It was so advanced that most either didn’t appreciate it what it was, or drooled at the concept. This rig was cowboy before cowboy was cool, period. 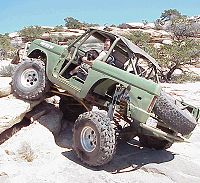 Featured in the December ’94 issue of Petersen’s 4-Wheel &

Off Road magazine, this rig was entitled “The Daddy Long Legs”. Now normally it’s not that big of a deal (well, kind of a big deal) to be featured in a magazine, and then be featured somewhere else, later. However, not only is it a big deal to be featured again 8 years later, yet have a serious off-roader that is still around 8 years later to tell the tale… But, more importantly, be THE very original, full-on, purpose built off-road machine that had custom 4-link suspension, long-arm (way long) locating bars, integrated roll cage, huge droop that is still considered massive by today’s standards, coil springs at all four corners, and be the baddest rig that was ever built in it’s day. That’s right folks, no BS here.

Stage West 4-Wheel Drive Center in Glenwood Springs, CO built this rig with the help of the owner clear back into the spring of ’94. Built primarily as a desert racer, this rig sports seriously long upper and lower long-arm axle 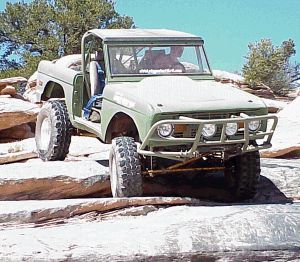 locating bars (and heim joints darn near as big as your fist all the way around), custom-rate (non-progressive) coil springs at all four corners, dual front, long-travel shocks tied to an integrated roll cage/shock hoop system/over-the-engine truss, a jungle-gym for a roll-cage that’s tied into the frame, dual rear long-travel shocks (tied into the roll cage), a quick-release spare tire carrier (integrated into the roll-cage of course) and so much more. 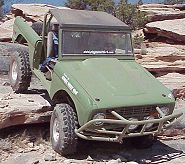 The drive train, for the most part is fairly stock in this rig to keep things simple and reliable. A fresh, moderately built 351 C mill was transplanted to send power to the stout, rebuilt C4 tranny. The tranny is controlled via an Art Carr shifter and sent through a stock Dana Model 20 T-Case out to the rear through a Detroit locked, Ford 9 inch axle. Know what else is really cool? The front axle is a hybrid Ford 9 inch axle body with Dana 44 outer ends, Detroit locker and matching 4.56:1 gears. Again… cowboy before cowboy was cool. 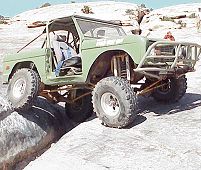 -desert racing 4-wheel drive machine so cool, let’s talk about how it wheeled.

We had the opportunity to wheel with Steve Hanson on the rig’s maiden voyage since it was pulled out of mothballs. The rig sat for way too long without any tender loving care, and Steve was lucky enough to resurrect this piece of 4-wheel drive nostalgia by trading the original owner for a racing motorcycle. Can anyone say SCORE!?

Without any upgrades or maintenance done to the rig, Steve flat-towed it all the way to Moab for the ’02 Easter Jeep Safari. After 4 days of hard wheeling, it only suffered a broken rear drive shaft U- joint. Not bad for a rookie ‘wheeler and a rig that sat in dry dock for many, many moons.

Check out some of the photos and captions below to see how well this rig performed off road.

Yes, that’s yours truly driving. What a rush it was to drive a piece of off-roading nostalgia!
2008-09-15
Rick Webster
Share

Previous Zero to Sixty, to Zero Again
Next KFI Products A3000 ATV Winch

In the last few years, the 4×4 world has been turned upside down with the …