Rockcrawlers For Christ – An Editorial 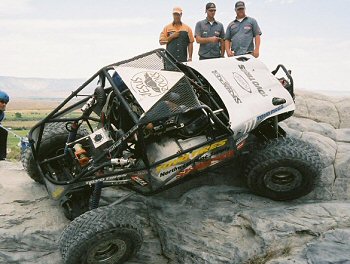 Go to any National Hot Rod Association event and you’re sure to see a Team RFC fish sticker on the side of a favorite race car. Christian Motorsports International Family of Ministries better known as Team RFC (including Racers For Christ) has shifted gears, brought things down to a slow crawl and added rockcrawling to its family of motorsport ministries. 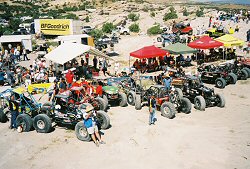 What is rockcrawling you ask? According to UROC, rockcrawling is the fastest growing motorsport in the world. Four- wheel drive vehicles, of an extreme nature, attack over obstacles similar to those that you would find at a trials-bike competition. Thousands of spectators come out to watch competitors negotiate these obstacles containing sixty degree plus walls, eight-foot crevasses, and tremendous side-hills. If you love the smells, the sounds, the pits, the carnage and the competition of motor sports, then you are a natural spectator for a Rockcrawling event. 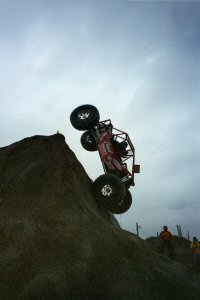 Chaplain at their competitions. Rules & scoring vary, but each sanctioning body shares the same fundamental basics, make it through a set of obstacles with no driving errors, under a time limit. Obstacles are scored like golf in that teams start out events with no points. As they negotiate their way though the obstacles points are accrued for their driving errors. Teams are scored points based on the number of gates they hit/bypass, using rear steer, backing up, leaking fluid(s), winching, or spotter manipulation.

UROC is broken into three series, Sportsman, Extreme Rockcrawling Nationals, and lastly Pro National Series. Each series is a progression in team talent and vehicle engineering. Top competitors compete in the Pro National series of events held nationwide to determine the Pro National champion. There is also a “super bowl” of rockcrawling consisting of the world’s top one hundred teams competing for the title of Supercrawl Champion. This year’s Supercrawl will be held in Las Vegas, Nevada October 28-31. If you make it to a Pro National event you will notice last years Supercrawl Championship team, Team Torbett #215, sporting Rockcrawlers For Christ stickers. They are not the only team out their proud of their Christian faith. Misfit Motorsports out of Idaho were the first to put Team RFC stickers on their buggy skins.

I have made it to almost every event this season and have been extremely impressed with the way Misfit Motorsports and Team Torbett compete and carry themselves. In Salt Lake City, Misfit finish the last three obstacles running in reverse because their transmission lost all forward gears. Anyone else would have called it a day, but not Mark Berger, he said lets have some fun and show the fans who our sponsors are. Then to everyone’s amazement he completed one of the toughest obstacles Salt Lake had to offer, one most teams failed to complete using both forward and reverse. I’ve watched these teams go back to the judge(s) not to complain about scoring errors in their favor, but to point out errors against them that the judge(s) missed. After four years of competing in UROC’s pro level, karma finally caught up with Misfit Motorsports in the last competition leading up to Supercrawl. It was exhilarating to watch as Team Misfit upset the current points leader to take 1st place at Vernal Utah. It couldn’t happen to a better team that has spent the season walking tall with grace and integrity no matter what obstacles stood in their way.

It is exciting to be involved in such an exciting motorsport as it grows from its grass roots beginnings. Growth of Team RFC is also anticipated as this motorsport continues its progression into the mainstream. With your prayers and financial support, there is no end in sight to the ministry opportunities that will come from adding rockcrawling to this ministry family. So remember to support your Chaplains and come out to a Rockcrawling event next time there is one in your area.

In the last few years, the 4×4 world has been turned upside down with the …