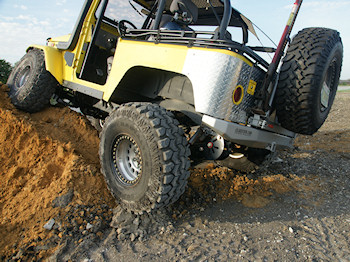 Everyone wants it. Heck, all the kids are doing it these days. But adding more can get really expensive really quick, and in these tough economic times, it’s nice to know that there are big brain engineers out there, hard at work, chasing the same quest, with tight budgets and high quality at the forefront of their mind. Our ’74 FJ40 was in desperate need of some too, as those spring-under leaf springs just weren’t putting out. We’re talking about axle articulation.

Now, rewind nearly 1 year ago today. There we were at the ’07 SEMA show, spying some new gadgets and goodies when we ran into Bart Williamson, owner of FrameOff Equipment Company. You see, Bart is a true automotive icon with more years turning wrenches than I have on the crapper. Bart has been restoring cars and trucks nearly all of his life, several of which have been Concours winners in various prestigious events.
Many years ago, Bart put his engineering skills to work, building one of the finest body lifting machines in the industry (it also serves as a rotisserie, pivot machine and so on). But you see, Bart has a deep, dark, hidden enigma that many people just don’t know about. He is a closet 4-wheel drive enthusiast too, and has been hitting some of the toughest trails that the western and southwestern frontiers of the United States can dish out.
This brings us to his newest invention, the RockSplitter™. The RockSplitter is a dual-stage, dual-shackle system like none other on the planet. Simple, elegant, yet exceedingly functional. Trust us when we tell you that this is not like any other dual-shackle system you’ve seen. You see, Bart was chasing more articulation for one of his 4x4s but didn’t want to add an expensive, complex 4-link system to achieve it. 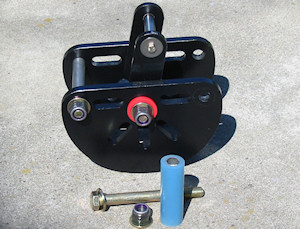 He knew that other dual-shackles gave you the added articulation, but carried some baggage with them, such as shackle inversion, component failure, twisting and dangerous unloading – a condition where the shackles can suddenly and unexpectedly fly open, potentially causing an end-over-end rollover – not good.
Bart went to the drawing board to craft a set of shackles that would perform as well on the street as a stock suspension, yet provide a tremendous amount of off-road articulation. The elimination of dangerous unloading, twisting, rock-catching protrusions and shackle inversion were at the top of his list. He also wanted a set of shackles that would serve to protect the leaf springs and hangers, and be tough enough to be slammed against hard granite rock, yet walk away with nary a blemish.
Once satisfied with the design, Bart obtained as much of the highest quality United States structural steel he could get his hands on, and then put his CNC laser cutting machines to work building a few prototypes. One of the final prototypes, which we’re running, incorporates anodized Grade 8 hardware, quality polyurethane bushings, and of course ½” thick laser cut U.S. steel assemblies. But the coolest thing about the RockSplitter shackles is that they have a thick hardened steel pin that can be inserted into the shackles to lock them into a closed, “on-road” state, thereby allowing them to function just as a normal shackle would – perfect for daily drivers. However, one quick pull of the pin and you are in off-road mode, ready to add many needed inches of axle articulation.  Brilliant!

Installation of the RockSplitter shackles isn’t overly difficult, but will take several hours for the average Joe to install in his garage. It is also highly recommended that a welder be used (for added safety reasons), but it is not required. 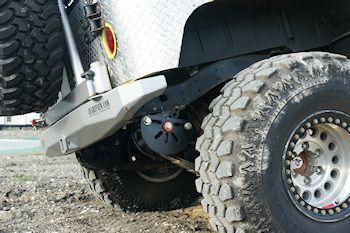 The RockSplitter dual-stage, dual-shackle system in truly amazing. Having both an on-road and an off-road setting is not only ingenious, but very welcome in our daily driver / off-road rigs, and works perfectly. Speaking of driving on the street… we spent 20 or so minutes driving our FJ40 around some twisty roads with the RockSplitter in the “on-road” setting. Even though our shackles provided 1 more inch of lift (we ordered it that way), we couldn’t tell that they weren’t factory spring hangers. There was no difference in ride whatsoever.
Pulling the release pins to get into “off-road” mode was a little difficult as the pins on our prototype unit didn’t slide out of the polyurethane bushings very well, but FrameOff Equipment has also ensured us that the production version of the RockSplitter have this fixed.
With the pins pulled, we headed off to find a nice big dirt mound to stretch the legs on our FJ and see just how well the RockSplitter shackles really performed – besides, you can only tell so much by articulating the suspension with a floor jack. With the hubs locked in, we started our ascent slowly up a large, steep, dirt mound. As we reached the apex of the dirt mound, I almost forgot that the RockSplitter shackles were mounted to the rig. They opened so smoothly and quietly, that it was completely unnoticeable, and it was only when I looked aft to see them extended did I remember that they were even on there. Coming back down the dirt mount, I watched the shackles close ever-so- smoothly without any banging or slamming. I have first-hand experience with competitive dual-shackles slamming open and closed, yet the RockSplitters moved like silk.
Our next test was to take a speedy assault up the same dirt mound with a goal of getting the new shackles to slam violently.Mission failure… again, the RockSplitters elegantly opened and closed as we sped up the mound.
The RockSplitter shackles are incredibly stable when extended too, in that they don’t bend or sway from side to side, a condition that competitive dual-shackle or hinged-shackles are notorious for. They provide a tremendous amount of protection for the leaf springs – an added bonus of their design – and in our opinion, work flawlessly.

OK, so you’re probably wondering how much extra travel we gained with the RockSplitter shackle system. We took some measurements from top of tire to bottom of wheel-well opening, fully extended with the old shackles in place, and then took our second measurement with the pins pulled (off-road mode) and fully flexed with the RockSplitter shackles installed. We netted an additional 5” of travel, which is quite a bit. We believe though, that our current shock absorber installation is preventing us from getting another 1-2” of downward travel though, and we’ll report on this a bit later.

Overall, the RockSplitter dual-shackle is an incredibly well-built system. It’s engineered incredibly well, likely a byproduct of their simplicity, and performs as advertised. They perform so well in fact, that my coming winter plans to install a 4-link suspension system are now on indefinite hold.

So, if you want to lay your hands on a set of RockSplitter shackles made in the USA with 100% USA materials, and put some American dollars right back into our American economy, call FrameOff Equipment Company, and tell them we sent you, you won’t regret it.