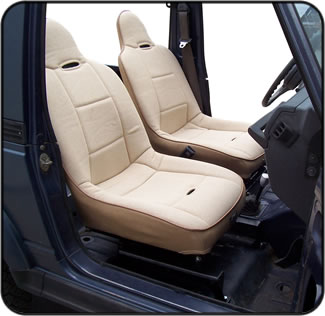 Spidertrax replaces the OEM slide rails and brackets primarily because, as any Sammy owner knows, the OE sliders simply don’t “slide” anymore. Most are pushing 20 years old anyhow, which makes them a nightmare to slide. Plus, with no rebuilds available, and slim-pinkin’s at the junk yard, this is a great way to not only install great suspension seats, but replace thos worn-out, unusable sliders at the same time. At the same time, the new slide-able slider will net you tall boys (and gals) out there an additional 4″ of seat travel – sweet!

While Spidertrax is into production, they are offering an exclusive online pre-release of their kit, which is intended to get more feedback on the fit and finish, so feel free to let them know how this combo kit worked for you. Online instructions for the Spidertrax PRP Seat Mount Kit (which is included in this combo kit) is available.

NOTE: PRP Roadster seats are custom built to your specifications and take about 3 weeks to ship.

Spidertrax will soon offer a rear PRP bucket style seat with a bolt-on conversion kit too.