We thought we’d bring you a little closer to the life of the editors at 4X4REVIEW.COM by letting you in on a few of our previously taped conversations (argument, quarrel, disagreement, dispute, difference of opinion, heated discussion or whatever politically correct version you want to call our “bitch sessions”) that we typically have at work, over lunch, over a few cold ones or at the shop while working on our rigs. Too bad this wasn’t video taped or you’d see the tack I put on Jody’s chair, the whoopee cushion he sneaks on mine when visitors arrive or any of the other office antics we usually have going on.

At any rate, this is our first of hopefully more-to-come of “staff arguments”that we’ll be bringing you. Today’s version – Land Cruisers vs. Jeeps… which are better?

Before we go directly into our dialogue, the conversation started because of Jody bragging about his “oh-so-great”Jeep that can do anything my Cruiser can do and more. Okay, actually I started it with the “vertically challenged” jokes (He’s roughly 5 foot nothing). Regardless of “he-said, she-said’s”, we tried to talk calmly about comparing completely stock Jeep CJ’s vs. Toyota FJ’s, but of course that didn’t last long as you’re about to see. By the way, we’re skipping the bald and fat jokes and getting right to the meat of this debate. 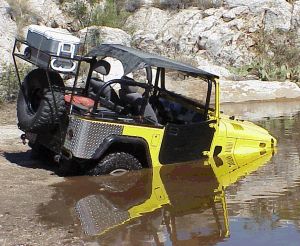 JC – “Are you nuts?”
RW – “No, I’m serious… I think that the FJ is a tank”
JC – “Sure, it weighs as much as one.”
RW – “Whatever… ”
JC – “Dude, how on earth can you say that an FJ is better than a CJ?”
RW – “FJ’s are more durable than a CJ, straight out of the box”
JC – “One word – BIRFIELD!”
RW – Bleep
JC – “Seriously, the birfield joint is the Achilles heal of the FJ, always has been, always will be. There’s no arguing it”
RW – “Okay, Model 30 axles… was that some kind of joke that Jeep played on their would-be owners or what?”
JC – [said during a fake coughing] “BIRFIELD”
RW – Bleep
RW – “one for one, what’s next?”
JC – “It’s your argument, you tell me why the FJ is better!”
RW – “FJ’s have been imported all over the globe and used in the absolute, most remote places ever seen. They’ve been used by militaries all over the earth.”
JC – “So have Jeeps, and Jeeps have been there to fight in almost every war, hell their heroes.”
RW – “I had nearly 300,000 hard miles on my original FJ 6-cyl motor when I yanked it and it was still running strong”
JC – “6 miles to the gallon rolling down hill, yes”
RW – “touché”
JC – “Jeeps… [Rudely interrupted by Rick]”
RW – “Older Land Cruisers are used by more farmers, ranchers and industrial agencies in the Aussie outback than any other vehicle! They’re used because they require little to no maintenance and come out of the box incredibly tough!”
JC – “I refer you back to my war fighting comment earlier, what’s tougher a farm or a war?”
RW -“That could be a draw depending on the circumstance.”
JC -“Besides nobody wants to change a Birfield joint on the battle field.”
RW – “Hey homeboy, you gotta be more original than that… Mr. ‘I’ve broken u-joints 3 times over.’ I’ve never broken a birfield and I run 35 tires with lockers front and rear. You were running 33’s with a friggin’ posi up front and broke a u-joint!”
JC – “Get a life man, I was doing Tabasco Twister and was stuck in a rock pile and you were too busy eating a ham sandwich to spot me”
RW – “good point… it was a great sandwich though! But regardless, you’ve broken, I haven’t, and I run bigger tires and lockers. They’re not as weak as people make them out to be.”
RW – [said with a Cheshire grin] “What are your other reasons for breaking your u-joints up front?” 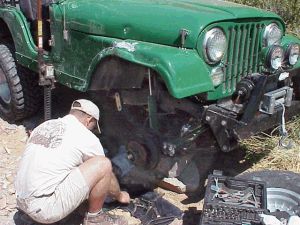 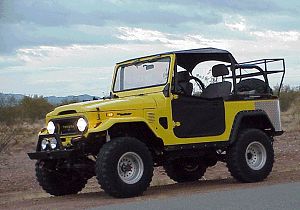 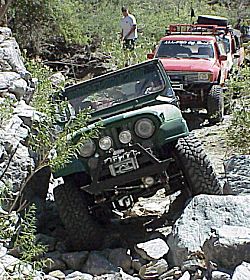 RW – “EASIER?!? How? They’re both solid axle, spring-under, short wheel base rigs.”
JC – “okay… maybe not easier… but definitely cheaper”
RW – “for the most part, yes, you’re right.”
JC – “Of course I am, that’s why I’m the tech editor”
RW – [Holding “back hand”up in the air] JC – [Furrowing eyebrows with a look of “bring it on bitch”] RW – “Wait a minute… we’re supposed to be talking about the durability of out of the box rigs, not modified”
JC – “okay… keep going then”
RW – “fine, why would the Australians use the FJ’s almost implicitly in the outback then?”
JC – [Smiling] “Because they’re not cool enough to own Jeeps”
RW – “I’m serious”
JC – “Jeeps are made in the U.S. and import duties would make them to expensive. ”
RW – “Because they’re more reliable, more durable and require less maintenance than a CJ”
JC – “Nope it’s just a matter of accessibility, importation time, and cost.”
RW – “I think it’s a matter of knowing what the toughest and strongest rig available is.”
JC – “I almost forgot, what is that material they make Cruiser T-cases from, aluminum right?”
RW – “Ouch, another shot to the heart”
RW – “I know CJ cases are all cast iron and thick as crap, got me there.”
RW – “Enough of this I am getting bored, lets go get some lunch.” 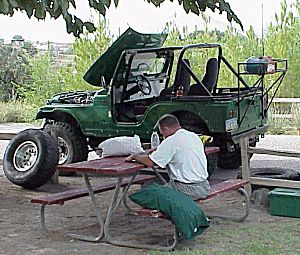 And so the saga continues, much like the chicken and the egg dispute, the CJ and FJ battle will rage on!