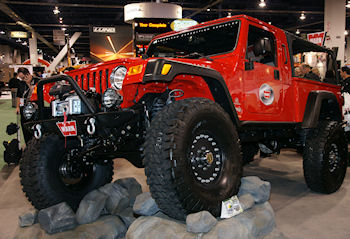 Gas prices got you down? Did your favorite presidential candidate lose the election? Is the economy stressing your budget? Let’s fact it folks, these are tough times. We do though, still have the great outdoors to explore and the great thing about the trail is that it doesn’t care about how much value your 401K has lost and hopefully you can still find some time to turn a wrench on your rig and get out there.

If you are looking for parts to upgrade your rig, SEMA is the place to be. And, like previous years, the city of Lost Wages hosts the largest gathering of aftermarket manufacturers known to man. You could literally build a hundred world class rock crawlers, tow rigs and other off-road machines from scratch with the parts on display at the Las Vegas Convention Center. Unfortunately SEMA isn’t open to the public, but we’ve got backstage passes and through the magic of the Internet we have compressed more than three million square feet of parts and accessories into a package small enough to fit on your computer screen – cool.

Concerns about the economy were apparent this year though and the theme of the SEMA show seemed to be reinvestment and improvement into existing products. A lot of manufacturers are feeling the pinch of shrinking budgets and a scant few were willing to risk the huge expense of releasing new products into a marketplace full of cash-strapped consumers. As a result, the innovation quotient of the show was down over previous years. Last year there were so many cool new products that we ran out of time before we ran out of things to see. As the show wound down this year, however, we were scratching our heads and wondering why we had so much time to spare.

That doesn’t mean the show was a bust, however. On the contrary there were still plenty of new goodies, and more than enough improved ones to help you continue to build you’re your rig.

One thing we did note though, is the complete lack of tube buggies that were present. They were replaced with capable trail rigs, almost exclusively based upon the Jeep JK platform. Does this mean we’re seeing a major market shift with trail rigs becoming the king of the 4X4 industry? Read on, and you decide.