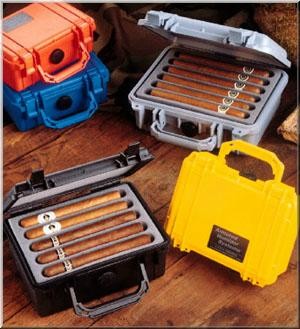 For the most part, every job has its perks and bonuses. Some of ours include test driving new vehicles, getting 4-Wheel Drive information before most others, and, on occasion, receiving a note or a phone call from a manufacturer claiming that they have an indestructible product that they’d like us to test. Whenever I hear that, I have to seriously suppress a diabolical, almost evil-like laugh that would sound something like “Muhahaha!” This is usually followed up with a glance over to my Tech Editor, Jody Campbell, with a furrow of the brow and a wicked smile. “Bring it on!” We say. We’ll break just about anything.

Not too long ago I found myself in the men’s room of a local pub. Instead of the usual phone numbers of ol’ Mary Jane Rottencrotch written on the wall, I noticed a rather large advertisement for, now get this, an “Armored Humidor.” Claiming acute stoutness, waterproof construction, it’s ability to maintain a constant humidity and an unbreakable case that meets military specs for high impact, humidity and immersion. I just had to get my hands on one. Being an avid smoker of a fine rope, I’ve always found it difficult not only to keep the humidity constant in my cheap humidor, but also darn near impossible to bring a good stogie with me when I went wheelin’. They’d always end up broke, bent or all dried out.

Being that I’ve destroyed enough cigars during my regular outings to cover the cost of an Armored Humidor (roughly $30 to $90 in price), I figured it was worth the call. Speaking with the owner of the company, I asked him just how durable these humidors really were. Claims of indestructible, watertight and up to military spec were made… I mentioned running it over with a several-thousand pound Jeep. Without hesitation, I was told that if we could break it, he’d replace it free of charge. [Suppression of diabolic, evil laugh] Bring it on! 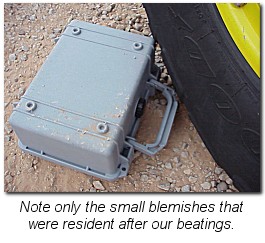 We took receipt of a nice pair of Armored Humidors just prior to our annual trip to the Easter Jeep Safari in Moab, Utah. This would be the perfect proving ground for such a test. Here’s how it went.

I started by packing some of my finest stogies (Arturo Fuentes, Cohibas, Monte Cristos, Opus X, etc.) into the Model 1200 Armored Humidor, which holds 18 Churchill size (8 ¾” long) smokes into three foam trays. For good measure, I tossed in one of my humidity gauges and subjected it to various temperatures ranging from hot, humid days in the sun to 3 days in my deep-freeze. Each time I opened it, it rang in at 69 – 72% humidity (70% is optimal). The humidity is controlled via a “Humidipak” component. This “two-way” humidity control works 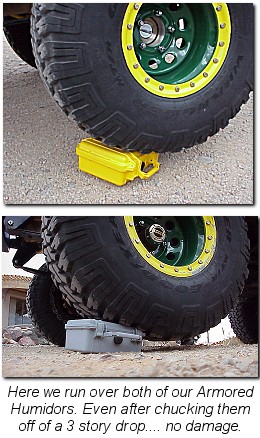 by continually responding and adjusting to temperature changes and to the outside environment by either adding or removing water-vapor-as needed-to maintain a constant and perfect level of humidity for your cigars. 2-way humidity climate control eliminates any fluctuation in the cigars’ moisture-content. This is a good thing.

On to the beatings…

The next battery (or should I say battering) of tests started by shipping my Armored Humidor across the country via the postal system. Not quite (but almost) the gorilla’s that handle your baggage at the airport, I was curious to see how it would respond to the constant changes in air pressure. The Armored Humidor comes standard with a screw-type pressure / vacuum release system. Worked perfectly.

Our second and final series of test were designed to try and break this humidor. We started by chucking it off of a 3-story roof onto the hard pack dirt, twice. With the Armored Humidor showing some blemishes, we figured it was now weak enough to be crushed by driving over it with one of our project Jeeps. Well… as you can see from the pictures and video, it didn’t give one bit. In fact, aside from the blemishes it received from our beating, it’s still water and air tight, and our oh-so precious smokes were unscathed!

Sure, we could have run it over with a bulldozer, took a blowtorch to it, smashed it with a good 8-pound sledge or let Oprah sit on it, but after all, who the hell would do that? Our real-world tests proved that accidentally running it over with a truck and chucking it from about 30 feet in the air, would keep your stogies safe and sound. Heck… even those disgruntled postal workers didn’t have the brawn to damage it.

Bottom line – If you smoke an occasional cigar and if you’ve been to this website more than once (e.g. you’re an outdoor enthusiast), you gotta get yourself one of these. Here’s how.