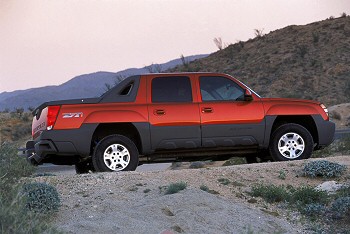 The Chevrolet Avalanche takes something old (fold-down rear seats), something new (removable rear window glass), and puts them into an unusual place – a pickup truck. The Avalanche is, essentially, a crew cab pickup with removable rear glass and fold-down rear seats to effectively extend the bed by a few feet, so drivers to have a large cab without making the truck unmanageably long. The rear window stashes into a convenient pocket so it can actually stay in one piece, and not get left behind.

That’s the “magic midgate” part of the truck, as well as the much-hyped “SUV to pickup conversion.” It’s not quite as impressive as it sounds on TV, but it works very smoothly, and a single person can have the rear seat folded down and the window stashed away in a couple of minutes. Likewise, taking the bed cover off is much easier than with a soft tonneau cover, and the cover itself provides better security.

The bed is covered by three solid plastic covers, each easy to remove and reinstall, with levers cleverly covered in glow-in-the-dark plastic. They protect the contents of the bed from thieves and the elements (even a strong, gusty windstorm didn’t phase it), while making the truck more aerodynamic. Two large cargo lamps are mounted in the sides of the bed for further visibility, but they need to be turned on in the cab. Our first test vehicle (2002) had room on the sides in plastic containers for tools and other objects; these containers were part of the plastic cladding on the sides, and had their own locks. Our second vehicle (2004) looked much better, with metal sides, but no containers, for a savings of $600.

The plastic sides of the first vehicle protected against minor bumps and scratches – they reached fairly high – and also provided footholds to launch your way into the high bed. The second vehicle had a step built into the rear bumper, which could not be used when the gate was down, making it somewhat pointless – especially since the top covers can’t be removed unless the gate is down! Getting up into the bed to load or unload is rather difficult unless you’re tall, given the height of the truck. Optional side steps are helpful for getting into the spacious cab, but don’t help with getting into the bed.

The bed itself is covered with a removable plastic mat that protects against damage while holding things in place – a better (and quieter) solution than hard plastic bed mats. We appreciated being able to load up the bed with delicate cargo but heavy – used computers and monitors – without needing any protective material, and without fear of damaging the components or the truck itself. The exceedingly heavy tailgate had a lock for security, which was not tied into the power locks. 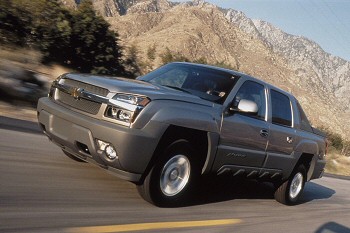 The Avalanche is expensive – over $30,000 – but it comes with many amenities. Our 2002 model had drink heater/coolers that worked simply and well, but could not hold, say, a large Coke bottle. It also had an oil change reminder lamp, which can help to extend the gap between oil changes considerably (because oil usually does not need to be changed every 3,000 miles, and GM’s computers are better at estimating when it really doesneed to be changed).

Our 2004 model had an extensive driver information system, with gas mileage for personal and business trips, timers and total distances for personal and business trips, and, among other features, an oil life timer that tells you how much life is left in your oil – as a percentage (e.g., “93% oil life remaining.”). This makes it a more precise way to avoid unnecessary oil changes. Also, because the system has a fairly large display, it can say things like “left driver’s door open,” which is much more informative than having a simple lamp.

Perhaps more to the point, our 2004 model had the usual clever GM features like the excellent OnStar and a well-designed optional thermostatic climate control (the temperature is quickly set by a single knob). Indeed, ours had separate controls for the driver and passenger (both in front). Standard functional features include speed sensitive steering, four wheel antilock disc brakes, and antitheft systems.

Owners can also customize various aspects of how their vehicle works – for example, whether one door or all doors automatically lock and unlock. The automatic headlights and DRLs can be overridden, but only on a drive-to-drive basis (it defaults back to automatic when the key is taken out). Fortunately, the automatic headlights go on immediately if it’s dark. We’d still prefer an easier manual override.

One of the more welcome improvements in our second test model was Stabilitrak, GM’s advanced stability control system, and the main reason why the Corvette is so much more civilized than the Viper. The Avalanche, equipped with Stabilitrak, is far better around turns than it has any right to be, given its heavy-duty construction and capabilities, and its relatively decent ride – for a truck, that is. It can swing around turns surprisingly well, with nary a peep from the massive, non-performance tires. The brakes are excellent, too. Just don’t get overconfident, because, after all, it is a darned big and tall truck.

Power is good, with lots of torque, for on-demand acceleration – hardly muscle car material, but enough for confident passing under most conditions and at just about any speed. Gas mileage is not so good, with the EPA rating it at 14 city, 18 highway. If you wanted an Avalanche for interior space and status, we suggest you get a Chevy Venture for interior space, and restore a muscle car for status. It’ll cost about the same, but give you much better mileage and a better ride – that is, the Venture will. 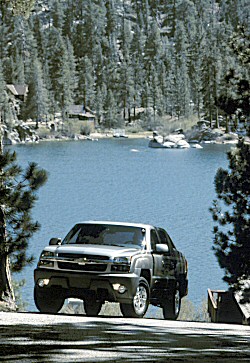 We were surprised by the quality of the ride with a moderate load. While somewhat stiff and jouncy with no load – as all full size, serious duty pickups are – the Avalanche becomes quite tame when the bed is filled with, say, obsolete computers, monitors, and laser printers. Suddenly, it seems more like a near-luxury sedan than a pickup. Sound insulation is good, wind noise present but not too strong, and the vent system fan quiet even at higher speeds.

The interior is nice and well arranged for the most part. Ours had a built in DVD rear-seat entertainment system, showing the Avalanche’s function, for most of its owners, as a family van rather than a work truck. As noted earlier, most minivans will provide surprising interior space, far better gas mileage, easier parkability, much lower pricing, and better interior amenities, but for those who plan to do a lot of towing with their kids in back, or who need to use their work truck for family chores, the DVD can be handy. It flips down from the roof, neatly obscuring much of the rear view for the driver but at least staying out of harm’s way, and allows kids to use wireless headphones while the passengers up front listen to the radio – in our case, XM satellite radio. The rear speakers automatically shut off so the stereo doesn’t make it impossible for the kids to hear their DVD. The system works well most of the time, but the kids really have to know how to work it, because it can’t be worked from the front seat – turned on and temporarily shut off, yes, but most DVDs now aren’t simple push-and-play items. You have to wait a bit, then select PLAY MOVIE, then hit PLAY, and that requires either someone reaching up and forward to hit the controls, or someone with the remote control. It also works, though not as well, with ordinary wired headsets. If desired, the rear passengers can simply listen to the radio instead – choosing a different station than the front folk.

Visibility is very good for the most part, with no serious blockages (when the DVD screen is up), large rear-view mirrors (optionally with built in turn signals), and powerful headlights. We appreciated the mirror fold-in feature, which lets you electrically fold both mirrors at once with the press of a single button, to allow easier passage around the truck – as well as the option (meaning you can shut it off) to have the mirrors tilt down when you back up. We only wish the tilt-down and tilt-up was about twice as fast, since it took the mirrors a while to catch up.

The front has the new Chevrolet styling, and is more similar to the Impala in some ways than to past Chevy trucks. People on the street seemed to find the styling fascinating, from the rugged-looking mesh grille to the Pontiac-like, grey body cladding on the ’02 and the sleek metal sides topped with plastic on the ’04.

The base price for the four wheel drive model we drove in 2004 was $35,285. Our test car also had the $3,865 preferred equipment group, which gave us six way power heated bucket seats with driver memory and leather surfaces – the heat, by the way, could be applied to the back or bottom of the seat separately – as well as rear seat audio controls, an in-dash six-CD changer, Bose speakers, the power folding, heated mirrors with integrated turn signals and auto dimming on the driver’s side, a towing package, dual zone automatic climate control, power adjustable pedals, OnStar, and universal garage door opener. The power sunroof and XM Satellite Radio added another $1,420 – not including subscription charges for XM. The rear seat entertainment system (DVD player) kicked the price up another $1,295, and side impact airbags were an extra $350. The stainless steel tube that acted as a step to get into the cab, with a nonskid top, cost another $585, but was offset by a $600 reduction from sacrificing the body hardware (lockage containers and such).

We could go on and on about the interior and such, but for the most part, this truck is a Silverado 1500 with a clever midgate, bed cover, and such, so see our Silverado review for more details.

General Motors has done it once again. The Avalanche is an amazingly well executed idea, so simple it’s brilliant, and currently unique among pickups and SUVs. It’s still a work truck – so if you want one for transporting your family, get a Chevy Venture or Dodge Caravan – but it’s a remarkably practical work truck, and it still beats anything on the Ford lots. If you’re in the market, take a look.