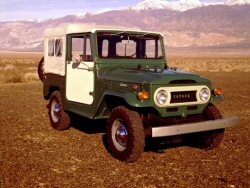 We all get into 4 wheeling for our own reasons. Some of us want to get back to nature or just spend quality time with the family. Others take pleasure in the challenge of modifying a vehicle to crawl over rocks, into mud, through deserts or in and out of any other no-mans-land.

The challenge of designing, fabricating and installing countless parts to reengineer and modify a vehicle into a more capable 4WD provides a creative outlet for weekend mechanics every where. Their creations are often rolling works of art that rival or even exceed most military equipment in their ability to traverse unimproved terrain.

Throughout automotive history companies like Jeep, Toyota and Land Rover have also built their share of extremely capable 4WD vehicles. Yes, the same companies that are responsible for off-road duds like the RAV4 and the Patriot have also brought us a few factory ready off-road superheroes. These are vehicles that are ready to hit the trail in earnest as soon as you pull out of the dealership parking lot.

We dug deep into the archives and found ten vehicles that were ready to hit Moab, Teleco or any other trail you wanted to tackle right out of the factory. These are not necessarily builder rigs mind you. Yes, we know that there are those among you who could build a Subaru Justy that will out-wheel a mil-spec Hummer H1. This list is for rigs that are ready to tackle the trail right out of the showroom. No modifications necessary.

Disagree? Did we miss one? Did we let a dud sneak through? Let us know what you think. Drop us a note below, in the rate-n-review section.

International Harvester started planning the whole Scout thing back when bee-hive hair-dos, cars with foot-tall fins and I Love Lucy were at the center of pop culture. During that time, everybody and their mother’s brother was trying to figure out how to knock the Jeep CJ off as the ol’ king of the hill, and they had their work cut out for them. Come 1961, International Harvester’s planning had come to fruition and they released the original Scout, in hopes of being the company that could topple the legendary Jeep CJ.

By 1977, bee-hives had been replaced black silk jackets, gold necklaces, pork chop sideburns and bellbottom jeans. And while the Scout II line was toying around with some gaudy colors, horrible pin stripes and slot mags, the Super Scout came to be, and stayed true to function over form. It was cowboy when cowboy wasn’t cool.

The Super Scout II, not to be confused with the Shawnee Scout II, came with removable fabric doors, a roll bar, and a soft top – a real off-road machine.

The “Soft-top Safari” model was tagged the “SSII” by International’s marketing department, and as a result, buyers were generally unaware of the actual “Soft-top Safari” name. Eventually though, the “SS” letters were assumed to stand for “Super Scout”, and the name stuck – like it or not.

Here’s the really great part about Super Scout II… it took all of the best features from the Scout II lineup (Dana 300 transfer case, the T19 or 727 Torqueflite transmissions, and Dana 44 axles) and added a real open-air, off-road element to it. While the Scout II was just as competent off road, the SSII got back to the basics, making it purpose-built.

Right off of the showroom floor, the SSII could be put into severe duty service on a farm, work site or taken straight to some hard core trails.

Picture this – It’s 1966, LBJ is in the White House, the Vietnam War is in full swing and you are on the market for a new 4X4. If you were looking for something with serious off-road capability you had 3 choices, the Jeep CJ-5, the International Scout and the brand new Ford Bronco. Sure, you could have opted for a Toyota Land Cruiser or a Land Rover Defender but you have to remember in the 1960’s foreign vehicles didn’t have the dealer network, parts and service availability or reputation that they have today so they were a much more esoteric choice.

Ford was on a roll in 1966. After inventing the pony car in 1964 with the release of the Mustang, they decided they would attack the growing 4X4 market. Unlike the Mustang, which was based on the existing Ford Falcon, the Bronco was an all new design. At 92 inches, the Bronco came in between the ultra-stubby CJ-5 (80 inches) and the comparatively limo like Scout (100 inches). The stubby wheelbase gave the Bronco a terrific turning circle of 33.8 feet.

The Bronco came ready to play with a 170 cubic inch inline six engine belting out 105 hp. Later models were available with a 302 cubic inch V8 engines. Underneath the Bronco got the job done with a 2 speed Dana 20 t-case, a Dana 30 Front diff and a Ford 9” rear end. In 1971 the Dana 30 was replaced with a stouter Dana 44.

The Bronco’s styling was the epitome of simplicity. 2 boxes, flat glass and 90 degree angles abound. Apparently the styling team at Ford believed that if it wasn’t a right angle it was a wrong angle.

Alas, the industry marched on and competition from more powerful and better equipped SUV’s such as the Chevy Blazer led Ford to replace the Box Bronco with an F150 based version in 1978.

The FJ40 is one of the toughest, out-of-the-box 4WD rigs ever made. With sheet metal so thick it could almost pass for light armor the FJ40 is a venerable four wheel drive that will surmount nearly any obstacle, even in stock form.

Introduced in 1974 as a 1974.5 model the FJ40 Land Cruisers were powered by a torquey 4.2L inline six putting out 135hp. It will woof down fuel like Ned Beatty on a corn dog but it will last for hundreds of thousands of miles. Many owners swap out the stock 6-cylinder and transmission in favor of a Chevy small-block yielding much more power, better fuel economy and easier and cheaper parts availability.

Leaf springs mounted under the axles are found at all four corners giving it a stable, supple ride that is easy to lift. Parts availability is still strong, but expensive.

The 1974 FJ40 is a bit of an odd duck, as Toyota mix-matched parts during the early portion of the year. Prospective owners should check the VIN tag on the driver’s side door opening and make sure it was made on or after June of 1974. Even so, be sure that you’re driving a rig that has a 4-speed transmission, which means you’ll get the stronger transfer case, as well as the stronger engine. 1975 and up should pose no problem as they all came with the 4-speed transmission, the upgraded engine and transfer case. Don’t worry about finding a unit with power steering, as the multi-pivoted, bell-crank style steering systems were total garbage – you’ll need to rip it out and convert it to a Saginaw system – trust us.

Did I mention that FJ40’s are durable? FJ’s can still be found with more than 300,000 miles on them, traversing the most brutal terrains in the world without modifications.

There is plenty of room in the rig to hold 2 adults and two midgets (or kids) in the back, along with room for coolers and camping gear.

Two big options, air conditioning and power steering, appeared in 1979 and were available until the final units made it to America in 1983. Front disc brakes showed up in 1975, but previous units had complex drum brakes with dual pistons and dual wheel cylinders at each wheel.

Many FJ40 owners will confess that their three favorite things about owning one are:

For many Jeep purists the end of the real Jeep Era ended when the last CJ-7 rolled off the assembly line in 1986. Everything else has become car-like. The CJ-7 set the bar for future Jeeps – even today’s JK. Round headlights, 94” wheel base, solid axles, and great gearing all created an out-of-the-box off-road legend.

The CJ-7 was a huge step up for Jeep with the addition of 10” of wheelbase over the CJ-5 and door openings that could be used by anyone over 5’7” tall. The frames got marginally wider in the mid section for strength and support, and a wide trac version of the Model 20 and front Dana 30 found there way under the CJ-7 improving its stability. The CJ-7 also received longer wider rear leaf springs that not only let it ride better, but increased the off road flexibility as well. If you wanted options, you could choose from a variety of packages over the years: the Renegade, with Levi’s seat covers and top, the Golden Eagle (aka Super Chicken) with a giant bird on the hood, stripes and a color matched roll bar. The Laredo was the top of the option heap with available A/C, and another of the famous 1980’s stripe kits.

Easily modified and one of the strongest followings in the 4-wheel drive market, the CJ-7 has every available aftermarket part available for it. If some one wanted to they could actually build brand new CJ-7 from scratch with all the reproduction parts available. Lift kits can be installed with simple hand tools, gearing options abound for both the Dana 20 and Dana 300 t-case, and you can’t throw a rock in Moab without finding a CJ-7 with more powerful Chevy small block swapped under the hood.

The CJ-7 came is so many different varieties it could take pages to link them all together. From the 232 I-6 engine with a dismal T-150 3 speed to the 304 V-8 with a GM sourced TH 400 backing it up the list goes on and on. CJ-7’s were available with only two axle gearing options: 3.54 and 4.09 and the last few years saw only the 3.54 as the 1980’s gas crunch was in full swing. But the Jeep that still looms in a barn somewhere waiting for me to find would have to be a 1986 CJ-7 optioned with a T-18 transmission, Dana 300 transfer case, and the venerable Dana 44 rear end optioned with a Trac-lok. This combination was the quintessential CJ-7 and the foundation for which thousands have been built with aftermarket parts.

Looking for a full-size 4×4 with good gearing, V8 power, classic styling and a removable top? Look no further than the ’88 Chevy K5 Blazer.

1990 may have been our favorite year, as there were a number of major improvements made to the 350 V8 motor. They included improved oil control rings, a redesigned rear crankshaft seal (finally), a new camshaft sprocket design, non-asbestos intake manifold gaskets, and heavy-duty intake valves.

While the 1988-1991 K5 Blazers didn’t break any off-road ground, they were tough full size rigs with great off-road prowess. Owners could take the top off their rig and enjoy the open-air feeling of wheeling with the smaller utility vehicles, like Jeeps and Land Cruisers. The Blazer had a tight turning radius, which meant it could go places that other full size rigs struggled to go.

If the K5 Blazer had any issues, it was certainly with their front and rear axles. The Corporate 10-bolt axles were never known for their strength, and the rear axle had a c-clip design that was not only weak, but if (and when) it broke while off-roading, it meant that the owner was badly stranded.

Spark Plug Colors, and What They Mean