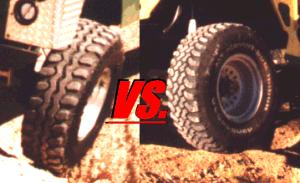 Here it is folks, the long awaited tire review that many of you have asked for. We took two of the most popular rock crawling tires on the market and put them to the test. This isn’t a one-person, one-sided review either. We put same-zie tires on similar vehicles and wheeled the snot out of them for over 6 months. These tires saw rocks, mud, trails, sand dunes and a street usage.

Here it is, early 2005. Just a few years back, if you would have told someone you were going to buy a set of TSL Super Swampers for your rock crawler, they would have told you “you’re nuts!.” The truth is, these tires are being seen today on almost every slick rock, rock crawling, trail throughout the United States. TSL Super Swampers were originally designed by Interco to be a “True Mud-Terrain tire”, but their design works incredibly well in nearly every off-road terrain.Super Swampers are designed with a patented “three stage lug”, (hence TSL) and large voids between the lugs to quickly self clean the tread during high speed mud bogging. The large lugs, and soft rubber compound are also the qualities that are drawing the rock crawling crowd to love them. The soft rubber compound makes these tires stick to slick rock like glue, and the large lugs act like “fingers” to grip rocks and ledges and pull vehicles up like a rock climber. Another great feature is that the sidewalls are one third again thicker than B.F. Goodrich Mud-Terrain’s to help resist sidewall punctures.

All of these great features don’t come with out drawbacks though. I have been using the TSL radials for about 8 months now and here are my complaints. The TSL radials wear much more quickly than other mud-terrains, (read BFG) they ride substantially rougher, and emit quite a howl at speed. I wouldn’t recommend them if your 4X4 is your commuter vehicle, or if you want a super quiet, smooth ride. If you are looking for the toughest trail tire on the market, then your search is over.

By Rick Webster
A few years back, if you would have told someone you were going to buy a set of BFGoodrich radial mud terrains for your rock crawler, the would have told you “good call!” – the same is still true today. The truth is, these tires have been around for a long, long time and for good reason. They are tried and true, and some of the toughest tires on the market, especially for the price.

Although I’m not really sure why they call them “mud terrains”, they don’t seem to do all that well in the mud, and they don’t self-clean worth a darn. That is unless, you pin the go-go pedal to the floor in high-range and wrap up 7,000 rpm’s on the tachometer. But for rock crawling, trail riding and snow driving, that’s a different story. The soft rubber compound makes the tires stick to rocks and trail obstacles incredibly well. The side walls, which are one third thinner as compared to the TSL Super Swampers, are quite durable and strong, yet very supple, which is quite handy when airing your tires down off-road. I’ve seen some seriously brutal punishment on the sidewalls of BFG’s without more than a blemish, but I have seen my fair share of side wall punctures and tears in the TSL Super Swampers.

Airing down on the trails requires the loss of much less air in the BFG’s than that of their TSL brethren. If I air down to 10 or 12 psi, my partner (Jody Campbell) in his similarly weighing rig must air down to 4 or 5 psi to achieve the same side wall flex. Additionally, they are pretty quite on the street considering their aggressiveness and they don’t wear out very quickly. I’ve been running the same set of BFG M/T’s for nearly 2 years and I’m just getting ready to replace them. All of these great features don’t come without drawbacks. I have been using BFG mud terrains for about 5 years now and here are my complaints. The BFG mud Terrain isn’t! It should be called the BFG Trail and Rock terrain or something like that. The outer most carcass of the sidewall (The black outer lining that covers the white stuff underneath) is a little too thin. You can’t really tell anymore what it says on the side, it looks more like a neo-artistical rendition of a whitewall tire. If you are looking for a tire that is rougged and tough enough to hit some of the hardest trails, yet sophisticated enough to drive daily, then your search is over… the BFG M/T is a great bet.