Home : Tech : What is tire siping?

What is tire siping?

Tire Grip, we know just how important it is while we are climbing a ledge or traversing down a large rock. But, not only is traction important while we are wheeling, but also while driving on the street. This leads us to our latest tech review on a very effective, yet inexpensive traction aid. It’s called siping. We’ve seen this done before on various rigs and knew the benefits, but needed to try it first hand for ourselves.

Before we headed off to Moab for the ’98 Easter Jeep Safari, I contacted Tony D’Oca and Jay Friedman at our local Discount Tire Company and spoke to them about the siping process. They invited us to watch the process as they set up our ’87 Blazer and our ’77 CJ5. The K5 Blazer runs 33X12.50 BFGoodrich Mud Terrains and the Jeep has the same size tire but in an Interco Super Swamper radial. With the two tires having completely different tread patterns and different rubber compounds, this should make a nice comparison. 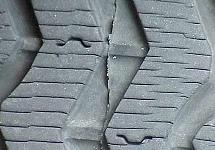 As for the history behind siping, the process has been around since the 1920’s and was developed by a guy named John Sipe (go figure). The idea behind siping was that John cut small slits in the bottom of shoes to give better traction while walking in adverse conditions. Now to present day, the SAF-TEE Siping and Grooving Company has developed a machine that cuts small slits perpendicular to the face of the tire, which in turn creates thousands of tiny edges that help with grip to improve traction and braking. Along with those two benefits, it improves tire life by 15 to 20 % and helps the tire run cooler. The National Safety Council performed tests on tires that have been siped, and found that there was a 22% increase in traction on snow and ice.

So, how does this all relate to the off road crowd? Obviously the traction is a benefit. The braking increase is a benefit, but I think that the increased wear is what makes me the happiest! Just think how nice it would be to have a set of tires last an extra three to six months. Follow along with the photos and we will explain each step the tire technician goes through to perform the siping process.

The first step to the process is for the wheel and tire to be mounted on the machine and once this is accomplished, out technician measured the remaining 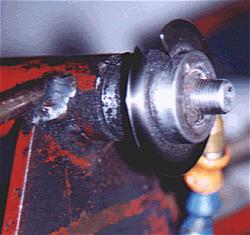 tread depth of the tire being siped. This is important so that the grooving process does not cut to deep. A drum is used to determine the actual depth of the cut and then the blade itself (see photo) is a spiral shaped design which has a two-fold job; the cut itself and turning the tire on machine. The technician then marked the tread with a yellow grease pencil to measure how wide the cuts are to be across the face of the tire. Once the drum and blade are set up, the angle of the blade to the tire is determined and locked into place. While the blade is cutting, a mixture of grease and water is sprayed at the blade to help with the cutting process and to keep the blade from overheating, becoming “gummy” and tearing the rubber. The BFG’s were cut to depth of 5/32″ and the Swampers were cut to 9/32″ due to those having 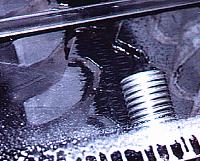 more tread remaining. We decided to sipe only the center of the Mud Terrain’s, while the entire face of the Swampers were siped.

After the process was completed, the techs bolted the tires back on our rigs, hand torqued the lug nuts (nice touch) and away we went. The first thought was WOW! I could not believe how quiet the tires were now on the street, especially with the Super Swampers. The noise reduction in our best guess was at least 40-50% on the BFG’s and 20-30% on the Super Swampers. There was also an immediate notice of an increase in traction. After about a 1,000 miles and many 4-wheeling trips, we did notice that the siping grooves in the Super Swampers opened up considerably more than those on the BFGoordrich tires.

So, all in all, we are both of the opinion that the siping process is well worth the $15-20 price per tire to have this done. The added on road traction, improved ride and quietness, and most important the added tire wear makes this one of our most favorite upgrades.

Spark Plug Colors, and What They Mean