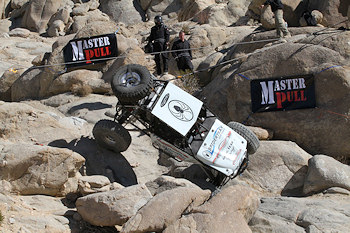 The Ultra4 Racing Season Opens With a Roar

Like modern day gladiators race teams gathered and fans flocked to watch the 5th annual King of the Hammers off road race in Southern California. Unlike the days of Rome, these gladiators had more than a few horses to drag them around and vehicle suspensions that where unthinkable in the days of old.

The King of the Hammers this year was comprised of two 60-mile laps through the Johnson Valley HOV area just outside of Barstow, CA. This area is famous for its tough off road trails such as Sledge Hammer and Outer Limits. Since King of the Hammers is more than a desert race, many of these rock crawling areas would be part of the race course.

For those who needed to Qualify for this year’s race, a Last Chance Qualifier (LCQ) run was held. The LCQ used a small portion of the course to sort out the teams that would move on the main event on Friday.  It was held as a timed event with a single rig on a section of trail at a time, and was truly men and machine against the trails and the clock. The top 23 out of 70 racers moved on to race in the King of the Hammers 2011.

In addition to the LCQ and KOH events, a UTV race was also held. This course was in the same general area but was setup so that relatively stock UTVs could complete the 40 mile course. Maybe it wasn’t as easy as the organizers first thought, as only 6 of the 16 starting rigs made it to the finish line. Casey Currie competed in both the UTV and KOH races, and as far as this author knows was the only driver to do so. 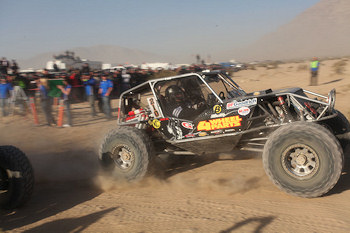 The official King of the Hammers began with the drop of a flag at 8:00am. Greg Adler in car 210 had the pole with Tracy Jordan in car 112 had the number two slot. As teams race out of the gate, on a timed start, they quickly ate up the open desert and soon where in the rocky sections. The first of these was a section called Elvis, 15 miles into the race. Elvis was hard on a few rigs as were the other rocky sections of the trail. By the beginning of lap two, many vehicles were in need of repair and a few were down for the count.

Lap two was the deciding loop for many teams as some dropped back or dropped out due to mechanical failures. The two underdogs where Shanon Campbell, Car 2  and Tony Pelligrino, Car 4485. Campbell came from the 62nd starting position to win the race by a healthy 31 minute margin over Pelligrino with a solo rig.  Pelagrino and his co-driver Bryan Little moved up from 41st to take second.

The top 5 finished by 3:15pm, in time for a late lunch while others would labor on into the night and be lucky to get cold leftovers for dinner. Overall 47 rigs would cross the finish line before the time limit of 10:00pm.

Overall King of the Hammers 2011 was a spectacular event. It will surely be even better next year. By why wait, it is only the first of the 2011 Ultra4 race events. Why not attend one of the others this season, or better yet, compete if you dare.

2011 King of the Hammers Video

2011 Griffin King of the Hammers Photos

Cantina for the Rubicon 2013