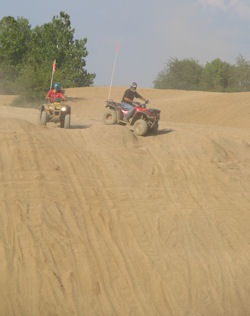 Over 1 million people come from all over the world to visit the Imperial Sand Dunes each year. Largely due to hot summer temperatures, the most popular time of year to visit is from October to May. During the winter, off-roaders can enjoy comfortable temperatures of 60-70 degrees. The most popular days of the year are usually fall and winter holidays like New Year’s Day, Easter and Halloween. Every year over 100,000 people come to the dunes to celebrate and ride.

People bring their motorcycles, dune buggies, four-wheelers and ATVs (All-terrain vehicles) to try their skills at the massive sand heaps. There are also places around to find OHVs (Off-highway vehicles) and ATVs for sale and for rent. The three most popular sections of Imperial are Mammoth Wash, Glamis/Gecko and Buttercup Valley, but Glamis is the most favored location for dune buggy enthusiasts. Glamis has five main dunes, ranging in difficulty from novice to expert: Competition Hill, Oldsmobile Hill, Brawley Side Hill, Lizard Hill and China Wall Hill. If you’re not an off-roader but still want to see the dunes, there are tours out of San Diego that take you around to see the impressive terrain.

According to desertusa.com, the dunes rise to heights of over 300 feet. Talk about a long ride down! Due to their height and color, the dunes are a famous landmark for the surrounding locals, as well as travelers who drive by them. They have also been used in television and movies. 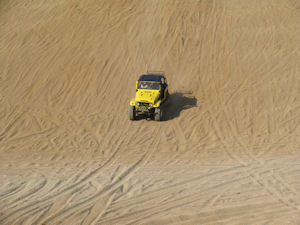 Return to the Dunes, You Must

The most famous movie filmed here was probably “Return of the Jedi,” the third installment of the original Star Wars Trilogy. Most notably, in the scene at the beginning when Jabba the Hut is about to feed Luke Skywalker to the sand pit.

Imperial Sand Dunes Recreation Area is not just for riding the sand. There is a wildlife park that is off-limits for OHVs and ATVs but perfect for hiking or horseback riding. There is also a lot of rare wildlife around the area and several places to view nature and its inhabitants. This area has been protected since 1994 and is only accessible by foot or horseback.

Maintained by the Bureau of Land Management, permits are offered weekly or seasonally, and campgrounds are available for those staying a longer period of time. With such a large span of land, there is plenty of room to do whatever activities or recreation suits you. It is important, however, to stay within the designated areas. There are military areas and active bombing zones around some areas bordering the Imperial Recreation Area, so you have to use common sense and stay out of these parts.

Cantina for the Rubicon 2013